The murals in the Salon show scenes from the Lohengrin saga, the continuation of the Parzival saga. 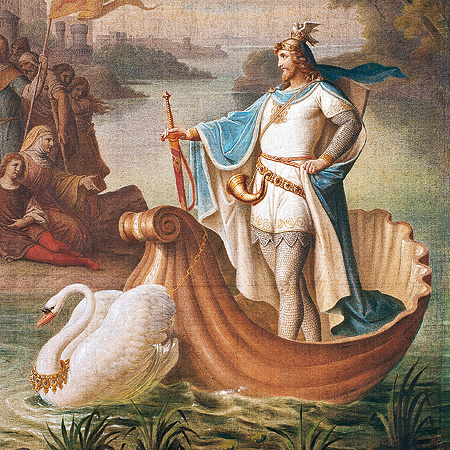 As the son of Parzival, Lohengrin is predestined for the life of a Grail knight. Through the "miracle of the Grail", he is elected to protect Elsa, a king's daughter who is in danger. Elsa's father, the King of Brabant, died without leaving a male heir. When he was on his deathbed, everyone around him swore to be true to his daughter Elsa. However, Count Telramund does not accept Elsa as ruler after the death of the king, and maintains that he promised the king he would marry Elsa and become king himself. Suddenly Lohengrin appears in shining armour on a boat drawn by a silver swan. He defends Elsa's rights in a duel with Telramund and defeats his opponent.

The swan knight of the Holy Grail then marries the king's daughter Elsa. Before Lohengrin takes his beautiful wife home, he reminds her of the vow to which he is bound by the order of knights to which he belongs: "You must never ask me where I come from, Elsa", he warns, "never. If you break this vow, I will be lost to you forever!" When their two children are already growing up, Elsa's curiosity is however so great that she asks the fatal question. The swan which brought Lohengrin reappears and takes him back to the Grail castle, so that he can fulfil his vow to help noble people in need.