History of the origins of Neuschwanstein Castle

Ludwig II, King of Bavaria since 1864, addressed the following lines to the man he so greatly admired, Richard Wagner: 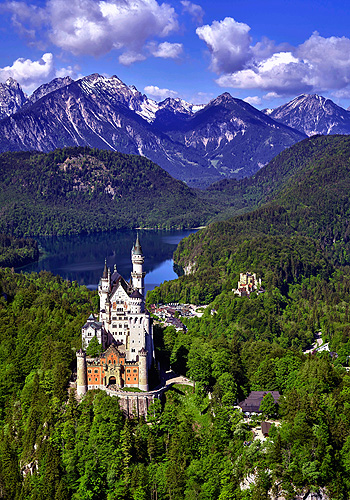 Ludwig II spent his childhood at Hohenschwangau
Castle (in the picture on the right).

«It is my intention to rebuild the old castle ruin of Hohenschwangau near the Pöllat Gorge in the authentic style of the old German knights' castles, and I must confess to you that I am looking forward very much to living there one day (in 3 years); there will be several cosy, habitable guest rooms with a splendid view of the noble Säuling, the mountains of Tyrol and far across the plain; you know the revered guest I would like to accommodate there; the location is one of the most beautiful to be found, holy and unapproachable, a worthy temple for the divine friend who has brought salvation and true blessing to the world.
It will also remind you of "Tannhäuser" (Singers' Hall with a view of the castle in the background), "Lohengrin'" (castle courtyard, open corridor, path to the chapel); this castle will be in every way more beautiful and habitable than Hohenschwangau further down, which is desecrated every year by the prose of my mother; they will take revenge, the desecrated gods, and come to live with Us on the lofty heights, breathing the air of heaven».

Almost all the aspects of Ludwig's Neuschwanstein are mentioned here. What is not mentioned, however, is the political reason for building: in 1866 Bavaria, allied with Austria, had lost a war against the expanding Prussia. Bavaria was forced to accept a "defensive and offensive alliance", which removed the king's right to dispose over his army in case of war. From 1866, therefore, Ludwig II was no longer a sovereign ruler. This limitation was the biggest misfortune of his life. In 1867 he began planning his own kingdom, in the form of his castles and palaces, where he could be a real king.

"More beautiful and habitable than the lower castle of Hohenschwangau"

Crown Prince Maximilian II of Bavaria, Ludwig II's father, had the ruined castle of Schwanstein rebuilt from 1832 in the "Gothic style". The young Ludwig was influenced by the romantic mountain scenery and the summer castle became one of his favourite places to stay. 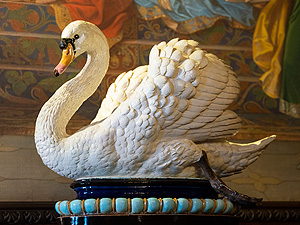 Hohenschwangau was decorated with scenes from medieval legends and poetry, including the legend of the swan knight Lohengrin. Ludwig identified himself when still a boy with Lohengrin, to whom Richard Wagner dedicated a romantic opera in 1850.

The swan was also the heraldic animal of the Counts of Schwangau, whose successor the king considered himself to be. Maximilian II had already made the swan a leitmotif of Hohenschwangau. Idealization of the Middle Ages was thus combined with concrete local tradition.

"The location is one of the most beautiful to be found"

Maximilian II had already had paths and lookout points constructed in the area around Hohenschwangau in order to be able to enjoy the scenery. In the 1840s, as a birthday present for his mountain-climbing consort Marie, he had the bridge, the "Marienbrücke", built high above the Pöllat Gorge.

From the narrow mountain ridge known as the "Jugend" to the left of the Pöllat, there was a magnificent view of the mountains and lakes. Maximilian II loved this spot and planned to build a viewing pavilion there in 1855. Crown Prince Ludwig was often on the "Jugend".

"In the authentic style of the old German knights' castles" 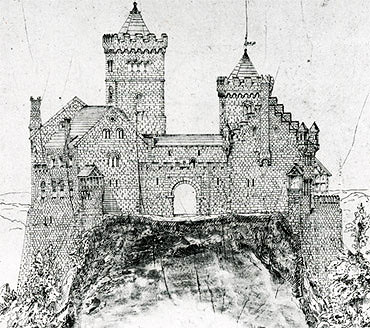 View of a castle based on the Wartburg near Eisenach,
pen-and-ink drawing, probably dating from 1867

On the "Jugend" were the ruins of two small castles: Vorder- and Hinterhohenschwangau. It was here that Ludwig II planned to build his "New Hohenschwangau Castle" (it only acquired the name of "Neuschwanstein" after the death of the king). It was to be a better recreation of an ideal medieval castle than Hohenschwangau. Perfection was the key: the "reconstruction" was to be closer to the original style and equipped with all modern technical features.

In 1867 Ludwig II visited the recently "rebuilt". Wartburg. Here he was particularly inspired by the Singers' Hall, allegedly the location of the legendary "Singers' Contest". The Wartburg and its hall became the leitmotif of the "New Castle". The architect Eduard Riedel also had to process ideas based on stage sets designed by the Munich scene painter Christian Jank.

"Looking forward to living there one day (in three years)"

The castle was not built as rapidly as the king expected. The project was too comprehensive and the building site on the mountain presented difficulties. Set designers, architects and artisans implemented the king's detailed ideas. The inconsiderate deadlines he set could sometimes only be met by working day and night.

The foundation stone of the "New Castle" was laid on 5 September 1869. The Gateway Building was constructed first, and Ludwig II lived here for a number of years. The topping-out ceremony for the Palas was not until 1880, and the king moved in in 1884. 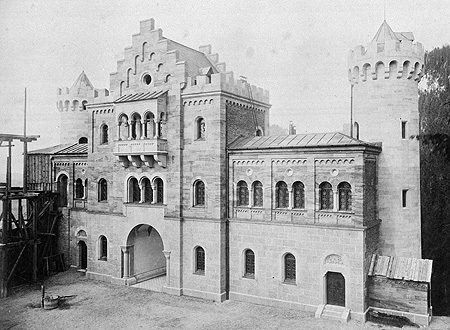 As he increasingly withdrew from human contact and focused even more on his royal dignity, Ludwig II changed the building programme. The guest rooms were replaced in the plans by a "Moorish Hall" with a fountain, but this was never actually built. The "Writing Room" was changed from 1880 into a small grotto. The modest "Audience Room" became a huge Throne Room. This was no longer intended for giving audiences, but was built as a monument to kingship and a copy of the legendary Grail hall. A highly modern steel construction was necessary in order to incorporate this hall in the Palas, which was already standing. A "knights' bath" was to be installed in the west part of the Palas, reminiscent of the ritual bath of the knights of the Holy Grail. Today there is a flight of stairs here for use by visitors, which leads down to the exit.