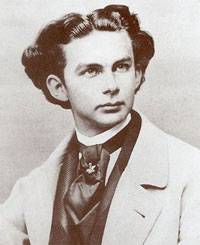 1845
25 August: Ludwig is born in Nymphenburg near Munich, the first son of the Crown Prince and Princess.
26 August: The child is baptised Ludwig at the wish of his grandfather King Ludwig I, whose godfather was Louis XVI of France.

1849 – 1863
The royal family spends the summers in Hohenschwangau Castle and the royal villa in Berchtesgaden.

1866
The conflict between Austria and Prussia leads to the "German War", as a result of which Bavaria is forced to form an alliance with Prussia.
22 - 24 May: King Ludwig II visits Richard Wagner at the Villa Tribschen near Lucerne.

1867
22 January: King Ludwig II becomes engaged to Sophie, Duchess in Bavaria, a sister of Empress Elisabeth of Austria.
1 - 3 June: Journey to the Wartburg.
20 - 29 July: Visit to the World Exhibition in Paris with a stay in Compiègne and Pierrefonds.
7 October: The engagement is broken off.

1868
21 June: Premiere of Richard Wagner's "Die Meistersinger von Nürnberg" in the Munich Nationaltheater.
First plans for Neuschwanstein Castle and the first sketches for a palace modelled on Versailles and later built on the Herreninsel in the Chiemsee.

1869
Completion of the royal apartment in the Munich Residenz.
5 September: The foundation stone of Neuschwanstein is laid.
22 September: "Das Rheingold" by Richard Wagner is first performed in the Munich Hoftheater.

1870
Beginning of the war between Germany and France. The king supports the alliance with Prussia.
26 June: "Die Walküre" by Richard Wagner is performed for the first time in the Munich Hoftheater.
The first plans for Linderhof Palace are drawn up.

1871
Founding of the Second German Empire.
King Ludwig II's conservatory is completed in the Munich Residenz.

1872
6 May: First "private performance" in the Munich Hoftheater.
22 May: The foundation stone of Wagner's Festival Theatre in Bayreuth is laid.

1873
Ludwig II acquires the Herreninsel in the Chiemsee.

1876
In August, on the occasion of the inauguration of the Bayreuth Festival Theatre, Ludwig II sees Richard Wagner's music drama "Der Ring des Nibelungen", but avoids the main performances.

1878
21 May: The foundation stone of the new Herrenchiemsee Palace, Ludwig II's long dreamed of "Versailles project", is laid.
Completion of Linderhof Palace; the bedroom is rebuilt from 1884.

1884
May: Ludwig II stays for the first time in the completed rooms in Neuschwanstein.
First concrete plans for a new castle on the Falkenstein near Pfronten in the Allgäu. 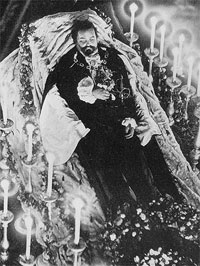 1886
9 June: Ludwig II is certified insane and declared unfit to govern.
10 June: Prince Luitpold of Bavaria takes over the regency.
12 June: Ludwig II is arrested in Neuschwanstein Castle and interned in Berg Palace.
13 June: The king dies in Lake Starnberg, together with the psychiatrist Dr von Gudden. His body lies in state in Berg Palace and the Hofkapelle (Court Chapel) of the Munich Residenz.
19 June: King Ludwig II of Bavaria is laid to rest in the crypt of St Michael's Church in Munich.