Neuschwanstein Castle – an example of Historicism

The government architect selected to convert Christian Jank's pictorial representations into plans was Eduard Riedel, who had already redesigned Berg Palace for Ludwig's father in 1849-51. In accordance with the king's wishes, Jank turned the "robber knight's castle" with late gothic elements that he had originally designed into a monumental "Romanesque" castle with a five-storey Palas in the general style of the Wartburg Palas.

Neuschwanstein, which everyone now oddly enough thinks of as a typical "medieval castle", is thus not a copy of any existing building, but a characteristic example of historicism, in which architectural motifs from the Wartburg are combined with those of castles from medieval book illustrations.

It is significant that Jank's project was criticized for not being faithful to history. The painter Michael Welter, who was recommended to the king by the castellan of Wartburg for his historical accuracy, undertook to provide the "necessary details" for Neuschwanstein based on Romanesque examples and declared that Jank's final designs would "incite the most virulent and bitter criticism". Court secretary Düfflipp turned down Welter's proposals in a letter of 21 November 1871, for the following most revealing reasons:

"It is the will of His Majesty the King that the new castle be built in the Romanesque style. We are now living in the year 1871, centuries after the period of the Romanesque style, and there can be no doubt that the achievements that have since been attained in the areas of art and science will also benefit us in the construction of this building. – By this I do not in the least mean that we should alter the style itself in a way that would impair its character, but neither do I mean that we should recreate the old days in every respect and not benefit from experience which would have been made use of them, had it been available". 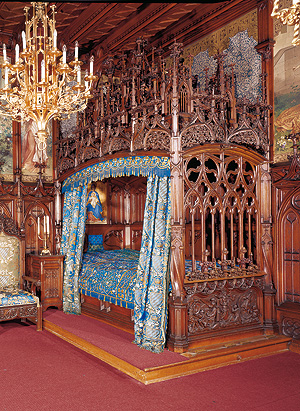 Historicism frequently involved not just copying the historical styles, but "perfecting" them using all the latest craft skills and technical means. For this reason the typical combination of modern (building) technology and historic architectural and furnishing styles was by no means considered a contradiction. This was also Ludwig II's philosophy, so that the "Romanesque" castle of Neuschwanstein has a very modern kitchen, hot air heating, and numerous large, tightly-fitting windows with frames made of industrial steel.

The exterior of the castle became increasingly austere when Georg Dollmann succeeded Riedel in 1874 and many of the picturesque details in Jank's designs were dropped. In the sections completed in simplified form after 1886 this tendency increased.

Julius Hofmann, who completed the complex on the basis of Riedel's plans from 1886 to 1892, designed the entire "Romanesque" interior of Neuschwanstein complete with furnishing in accordance with the king's ideas. Only the bedroom, designed by Peter Herwegen, and the adjacent chapel are in late-gothic style with furniture that is comparatively historic by comparison with the Biedermeier neo-gothic interiors of Hohenschwangau.