The murals in the Singers' Hall deal with the Parzival saga, whose continuation is the Lohengrin saga. 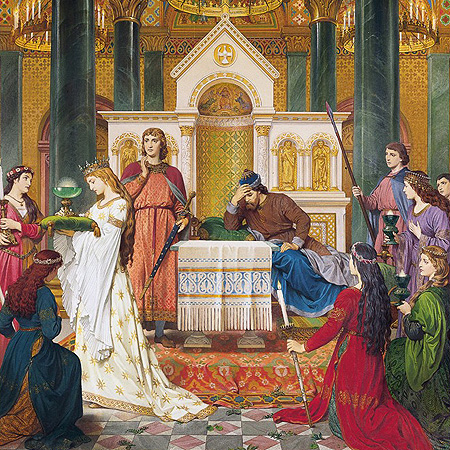 Parzival at the court of Amfortas.
Detail from the mural in the Singers' Hall, A. Spiess, 1883/84.

Queen Herzeloide brings up her son in isolation after the death of her consort Gamuret. However, after his first encounter with knights, he departs for the legendary court of King Arthur. Here Parzival meets the King of Cumberland, the "Red Knight", whom he kills with his boy's spear. With the knight's armour he survives further adventures and he then marries Queen Kondwiramur. On the way to visit his mother Parzival is received by the ailing king Amfortas at the Castle of the Holy Grail, Montsalvat, and at the banquet he sees the miraculous Grail. The knights hope that Parzival will release Amfortas from his suffering but Parzival fails to ask the king the crucial question about his health. That night Parzival is tortured by nightmares and the following day he is scornfully dismissed from the castle.

He roams restlessly from country to country; one Good Friday morning the hermit Trevrezent reveals to him the secret of the Grail. Continuing on his travels he encounters Gawan, the strongest of Arthur's knights, and defeats him without recognizing him. With the help of the sorceress Kundrie, Parzival finds his way back to the Castle of the Holy Grail, Montsalvat, where his wife Kondwiramur and their son Lohengrin are waiting for him. In Montsalvat he releases Amfortas by asking him sympathetically about his health and becomes King of the Holy Grail.