Ludwig II and his castles

Apart from Neuschwanstein Castle the Bavarian Palace Administration also cares for the following buildings, all of them commissioned by King Ludwig II: 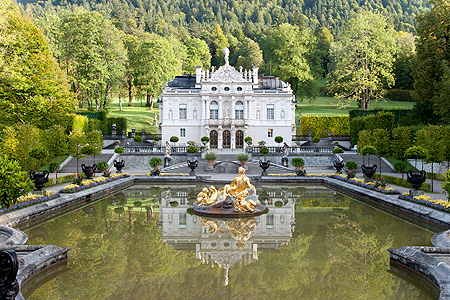 With this palace, finished in 1878 and the only one Ludwig II completed and actually lived in, the Rococo age experienced a revival. The richly ornamented façade of this relatively small palace conceals a world of opulence, radiant with gold and gleaming mirrors, with wall hangings and paintings, velvet and silk, crystal chandeliers, lapis lazuli, malachite and porcelain.

The main features of the beautifully landscaped park are the St Anna Chapel, the "Königshäuschen" (Royal Lodge), the ancient Royal Lime Tree with a platform where the king sometimes took breakfast, the Moorish Kiosk with the Peacock Throne, the Moroccan House, Hunding's Hut and the Hermitage of Gurnemanz. An "open sesame" rock leads to the artificial Venus Grotto with a waterfall and lake.

Further information about Linderhof Palace you can find on www.linderhof.de 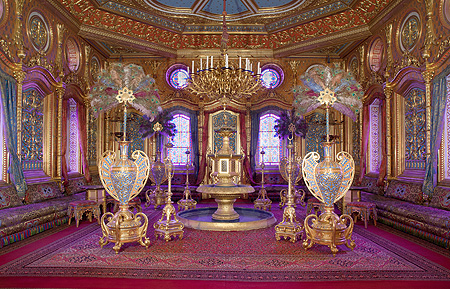 Ludwig II selected a unique setting with a view of the Zugspitzmassif for a mountain lodge. The wooden building with its rather modest exterior conceals a hall on the upper floor furnished with Oriental splendour. The king sought the seclusion of the mountains to celebrate his birthday and his name day in the lavishly decorated Turkish Hall furnished with divans and a fountain.

The King's House can only be reached on foot, either from Elmau or Garmisch-Partenkirchen.

Further information about the King's House on Schachen you can find on www.schloesser.bayern.de 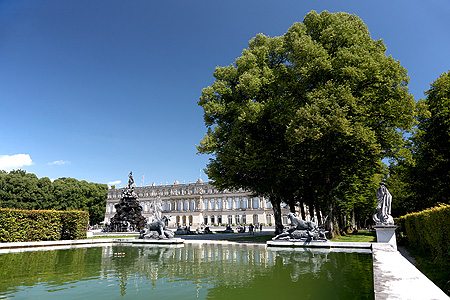 This palace was conceived as a Bavarian Versailles in honour of Louis XIV of France. Although when Ludwig II died in 1886 building was still in progress, the costs of this huge complex were already higher than those of Neuschwanstein and Linderhof put together.

The State Bedroom with its 3 x 2.60-metre bed was even more luxurious than its French model. The Mirror Gallery, almost 100 metres long, was lit by over 1,800 candles. The royal apartments are more intimate by comparison with these two staterooms.

The geometrically designed French gardens with their famous fountains represent only a part of what was originally planned but never completed, and palace and gardens are surrounded by a naturally landscaped park with old trees. The King Ludwig II Museum has exhibits documenting the life and work of the king. 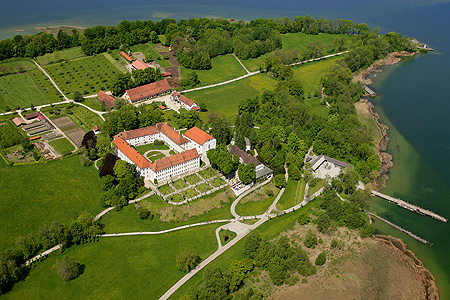 Benedictine Abbey – Monastery – Royal Palace: When Ludwig II acquired Herrenchiemsee Island in 1873 he had rooms in the monastery building later known as the Old Palace converted for his private use, and some of these have now been reopened to the public.

In 1948 the Constitutional Convention of Prime Ministers met here to prepare the Constitution of the Federal Republic of Germany. This important chapter of German history is documented in the museum together with the history of the monastery. Also worth visiting is the art gallery with works by Julius Exter (1863-1939) and the gallery of Chiemsee artists. In the Princes' Tract the Imperial Hall, the Garden Room and the Court Kitchen can be seen.

Further information about the sights on Herrenchiemsee Island you can find on www.herrenchiemsee.de