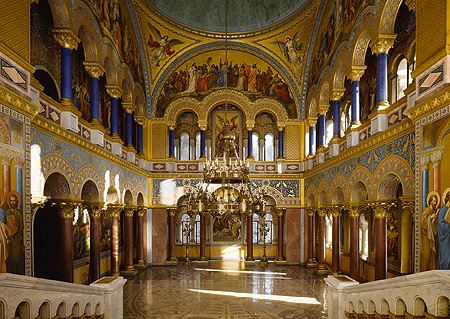 This sumptuous, church-like hall with its massive, four-metre high chandelier occupies the third and fourth floors and the entire west section of the Palas.

The Throne Hall was inspired by Byzantine churches and in particular the All Saints Court Church in Munich. In the northern apse there was to be a throne in place of the altar, but this was never constructed after the death of the king.

This combination of church and throne room illustrates Ludwig's interpretation of kingship: he saw himself not just as a king by God's grace, but also as a mediator between God and the whole world. This idea is also expressed in the cupola, which is decorated with stars, and the floor mosaic beneath it, which shows the earth with its plants and animals.

Beneath the cupola are representatives of pre-Christian kingdoms. The pictures in the apse area show Christ, the Twelve Apostles and six holy kings, while the deeds of the kings and other saints are illustrated on the walls. The Throne Hall was not intended for state occasions. It is an expression of Ludwig's expectations of kingship.

back to the Lower Hall

further on to the dining room