On the walls of the Lower Hall are illustrations of the Sigurd saga from the Old Norse saga "Edda". Sigurd corresponds to the Siegfried of the Middle High German Nibelungenlied. The continuation of the Sigurd saga is the Gudrun saga.

One evening as they wander the world, the gods Odin, Hoenir and Loki encounter a viper which is devouring a salmon, and Loki kills it. It transpires however that the viper was really the son of the magician Hreidmar, and his brothers are Regin and Fafnir. In order to atone for the deed, Loki must amass enough gold to cover the skin of the snake. Loki extorts the gold from the dwarf Andwari from the Nibelungen race. Out of greed he also demands Andwari's ring, on which the dwarf however lays a curse. 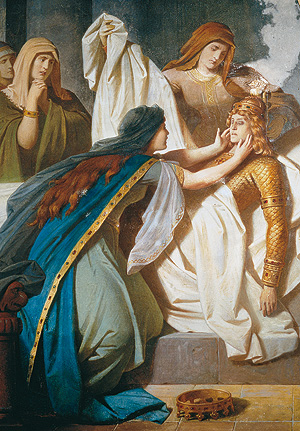 The ring soon does its work, as Fafnir and Regin kill their father to gain possession of the gold. Fafnir then refuses his brother his share of the "Nibelungen treasure" and also drives him out of his home village. Now in sole possession of the treasure, Fafnir turns himself into a dragon and lies down on the gold. Regin, however, sets up as a blacksmith in the vicinity of the cave. He forges the beautiful sword Gram and gives it to the young king Sigurd, so that he can kill Fafnir with it. After Sigurd has killed the dragon and bathed in its blood, he understands the language of the birds, who warn him of Regin's treachery. He then kills Regin as well and the treasure with its fatal curse is now his.

As he continues on his way, Sigurd encounters the sleeping Brynhild, who has been confined by Odin within a ring of fire. Brynhild is one of the Valkyries, who serve the fallen heroes in Odin's golden palace Valhalla, after they themselves – this is the direct translation of their name – have determined who is to die in battle. Entranced by her beauty, Sigurd swears to be true to her forever.

Sigurd continues on his way and arrives at the court of the Franconian king on the Rhine, where he meets the king's daughter Gudrun. She gives him a magic potion which makes him forget his vow and ask for her hand in marriage. Gudrun's brother Gunnar now sets out to win Brynhild, succeeding with Sigurd's help through an act of deception. Brynhild demands atonement for the humiliation she has suffered and has Sigurd killed. Then she kills herself with the sword and is burned together with Sigurd.